Maximise the number of live calves per breeding female

Manage cows and heifers for high fertility to maximise the lives calves per breeding female.

Profitability in beef production is driven by high stocking rate and high herd fertility, which are both a function of high feed quality and quantity (dry matter production).

In a fertile herd, 70% of exposed females will be cycling, exhibiting oestrus and becoming pregnant in the first oestrous cycle; more than 95% will be pregnant at the end of the second oestrous cycle (ie after 6 weeks).

The basic components of herd fertility are:

Nutrition is the key to understanding what really drives efficient reproduction. Nutrition influences the onset of puberty in heifers, and the ability to exhibit oestrus and get in calf quickly, either as heifers or return to oestrus post-calving in first calf heifers.

The key indicators of reproductive performance are body condition score for cows and liveweight for heifers.

The energy intake for pregnant heifers must always be adequate to maintain growth for herself, and for the developing gravid uterus. This requirement has been quoted as being around 40MJ for maintenance and 34MJ for each kilogram of body weight gained by the heifer in the growing stage to the point of calving. The developing foetus requires an extra 5MJ/day for the first five months pregnancy, 8MJ/day at six months pregnancy, 11MJ/day at seven months, 15MJ/day at eight months and 20MJ/day at nine months pregnancy.

Older cattle may have body reserves that can be used in times of energy deficit. The loss of 1kg of body weight will release around 29MJ of energy that can be allocated to the reproductive process over and above what has been consumed.

Controlled weight loss at certain times of the year is acceptable, as long as it does not impinge on biological function. For older cows, body condition score may fall as much as 1.5 units, say from condition score 4.0 in late spring after they have grazed the spring flush to a condition score 2.5 by winter. This equates to a 110kg weight loss, or a release of 3,000MJ of energy from fat without any undue side effects, if done correctly. The ability to 'mine' the body condition of cows is a great tool in shifting the pasture curve, but it requires careful management not to exceed the biological constraints and impinge on reproductive ability.

This explains why body condition score is an important factor in determining return to oestrus if feed consumed daily is not meeting total energy requirements.

Conversely, even when body condition score may appear inadequate, if high quality feed is on offer – over and above that required for growth and maintenance – adequate energy can be redirected to the reproductive process.

Body condition score is a retrospective measure, and current feed conditions must also be considered.

It is more accurate to calculate daily intake (MJ consumed) and match this to daily energy requirements (MJ required) of a particular stock class to achieve a predetermined outcome. This also allows proactive management of risk when feed is limiting.

Guidelines for heifer management and nutrition

Management for joining first-calf heifers and their subsequent performance is entirely governed by controlling the body weight from pre-weaning through post-weaning to joining, and then from joining to calving.

Adopting the concept of a target weight for joining that exceeds the weight required for the onset of puberty will ensure that all heifers are actively cycling and fully fertile when exposed to a bull. A target of 65–70% is easily achievable and will ensure that the maximum number of heifers conceive in the first oestrus cycle during the joining period. This will also create a concentrated calving pattern over a short timeframe, an even drop of calves and, most importantly for the calved heifer, a better chance of returning to oestrus to maintain a 365-day calving interval.

Critical mating weight is defined as the weight at which 85% of heifers fall pregnant over 45 days (two cycles).

If the breeding herd is outside these recommended guidelines:

Genetics, as reflected through various EBVs, also has a minor role in breeding for herd fertility:

Use Tool 3.5 of Module 3: Pasture Utilisation as the basis for determining how pasture can be successfully turned into animal products to profit the farm business. Strategies in Module 3: Pasture Utilisation enable you to more precisely manage the conversion of pasture energy and nutrients to saleable beef product while leaving pasture residue in an optimum condition for rapid regrowth. It also better matches the seasonal feed supply with beef enterprise opportunities and business objectives.

The time between calving and conception has a major impact on the reproductive performance of beef herds and cows must mate by around day 82 after calving if the mean calving time is to remain the same from year-to-year with a 365-day calving interval.

The inability to maintain a 365-day interval will invariably mean a drift in the mean calving date later and as a result the calving histogram will change, more late calves born, more cows fail to join on the next joining and drop out empty. The late drop calves have less growing days to weaning, lighter selling weights and more heifers unable to reach the critical mating weight with less growing days.

There is strong evidence that body weight and particularly body condition score of cows at calving has a substantial effect on the post-partum anoestrus interval. Increases in condition score during late pregnancy through the provision of good nutrition, particularly energy, can reduce the interval between calving and first oestrus for all cows except those in good condition where it has no effect. A similar outcome can be achieved through the provision of good nutrition during early lactation.

Figure 2: Effect fat score at calving has on days to first heat 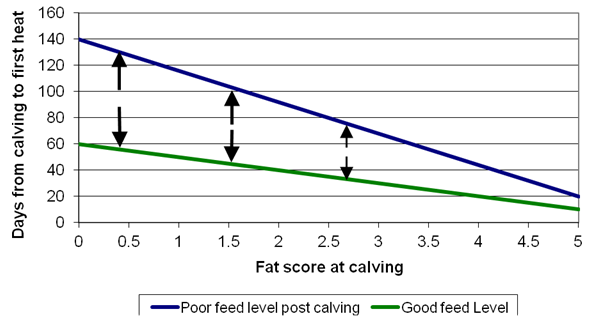 To increase conception rates, it is important to join females on a rising plane of nutrition.

Source: Merial Opportunity of a Lifetime

As Table 4 indicates, the real challenge in maintaining a 365-day calving interval lies with the heifer population. Only 68% of heifers are cycling within the 82-day period required to maintain the calving interval.

Important considerations for calving heifers include:

Heifers should be joined 2–3 weeks before the main herd as this allows 2–3 weeks longer to cycle post-calving and slot into the main herd to maintain the tight calving pattern. The downside is that these heifers have 2–3 less growing days to attain critical mating weight pre-joining, which means that monitoring weight gain post-weaning to joining is absolutely critical.

Heifer performance is critical. Underperforming animals are inherently less fertile, can fail to achieve maximum pelvic size leading to dystocia, and can fail to get into calf quickly as second calvers.

The effects of nutrition on reproductive efficiency in older cows is less apparent, and allows reallocation of the limiting factor in production, namely feed, to the younger cattle.

In seeking to strictly maintain a 365-day calving interval, high culling rates may be required which in turn increases the number of replacement heifers required to maintain the herd breeding structure. This practice results in a higher proportion of quality pasture being used for maintenance of the breeding herd because of the amount of pasture needed to grow females up to first mating. However, the benefits of higher heifer retention rates far outweigh the perceived downside of having to allocate quality feed to breeders.

Purchase of in-calf heifers to maintain herd structure increases the risk of introducing infectious diseases, particularly pestivirus (also known as bovine viral diarrhoea virus or BVDV) or Johne's disease, and if heifers are from an unknown genetic background, they may not be compatible with strategic business and breeding goals. Purchased heifers are also unlikely to match the planned calving period and could have higher rates of dystocia than mature cows.

Biosecurity of individual herds is a serious consideration, and any introduction of outside stock can expose the herd to many animal health issues.

What to measure and when

The stock manager should also observe the breeding herd for evidence of female activity (cycling) prior to the commencement of mating.

Further information on supplementary feeding can be found on the websites of state departments of agriculture:

Management of heifers and cows before calving

Guidelines for managing heifers and cows before calving

Careful management of nutrition of pregnant females in all trimesters of pregnancy pays dividends at calving time. Calf loss will be minimised and calving supervision can be kept to a minimum. Calving difficulties will be reduced by maintaining cows at condition score 3.0 (3.5 for heifers), supplying adequate nutrition from joining to calving to prevent growth restrictions to reaching maximum pelvic size. This requires maintaining a condition score of 3.0–3.5 through to the point of calving.

If females go outside these guidelines:

Poor nutritional management of heifers and cows before calving can lead to a number of significant problems, including

What to measure and when