The body fat reserves of beef cattle are important at critical stages of the production cycle. At the beginning of winter they influence the amount of feed required to ensure satisfactory reproductive performance. The objective of condition scoring is to obtain a simple and reliable estimate of the body fat reserves of live cattle. The condition score provides an estimate of fat reserves that is independent of size and is a more reliable descriptor than liveweight alone.

Cows can be drafted at weaning on condition score so that preferential feeding can be given to those that may not achieve their target scores by calving.

The technique is easily learned and, although subjective, has been shown to give reliable results when related to subcutaneous fat cover. The method is a ‘hands-on’ system, where two areas of the animal's body are palpated to assess fat cover (see Figure 1). The two areas are: 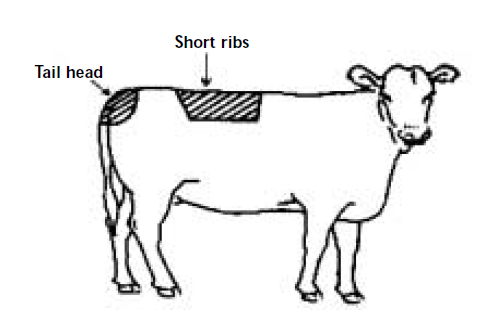 The degree of fat cover around the tail head is assessed by using the fingers and thumb and should be done at the same time as assessing the short ribs. The appropriate score is given depending on the degree to which palpable fat can be felt.

Figure 2: The degree of fat cover around the tail head and short ribs is assessed using the fingers and thumb

The scores are described as follows:

The score can be varied half a score depending upon the amount of tail head fat, for example if the short rib palpation (using the thumb) gives score 4 but the tail head is a typical 3, the score would then be 3.5. Scores can be directly related to fatness at the P8 site.